His music combines so many diverse elements that it is practically its own genre.

J
Joe Craven is not just an entertaining musician with a penchant for the mischievous, he is a teacher and student all at once and he will draw you into his performance by including you as though you’re part of the show itself. His gift of gab is unprecedented and his musical knowledge impressive. Joe’s openness and expression of gratitude for the gifts he’s acquired make it all the more fun for him to share them with his audience. 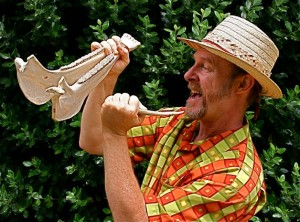 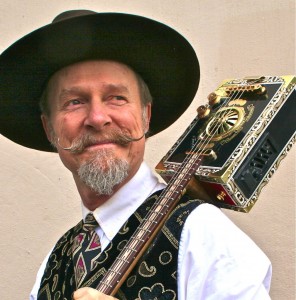 Always looking for the next expression and object to make music with, Joe is a musical madman with anything that has strings attached; violin, mandolin, tin can, bedpan, cookie tin, tenor guitar/banjo, mouth bow, canjoe, cuatro, CBG, berimbau, balalaika, boot ‘n lace and double-necked whatever. Joe has created music and sound effects for commercials, soundtracks, computer games and contributions to several Grammy-nominated projects. An educator for over twenty five years, he has presented at well over 100 schools, universities, civic and community groups. He has paneled at the American String Teacher’s Association, is a keynote clinician and a co-director of the youth academy at Wintergrass in Seattle for over ten years. Joe is the Executive Director of RiverTunes in California and a coast to coast Emcee of a variety of music festivals, including Delfest and the 40th Telluride Bluegrass.

Whether a presentation to folks in Costa Rica, corporate heads in Contra Costa, CA, Goodwill Industries, The United Way, young men in a juvenile detention center, families in homeless shelters, a university lecture in Washington, jamming with Gnawa musicians in Morocco, on stage at Carnegie Hall with Stephane Grappelli, or on stage with an angel food cake pan in front of thousands of school kids in Scotland… no matter who and what Joe’s connected with, he’s at home and loving every minute.

‘Everything Joe touches turns to music,’ says mandolinist David Grisman, with whom Joe played for almost 17 years. No one who saw Joe wring a percussion concerto from his garbage-bag raincoat during a downpour at the Strawberry Music Festival could disagree.